Since I came back from New York in October, I’ve maintained the policy of turning on the news as infrequently as possible. Regardless, it is getting to be that time of year when the tv news shows are full of prognosticators called in to reveal what we should all be expecting for the coming year.

Last year, I decided to get into the prediction game myself, with ‘Art Fortunes’. This involved taking 52 collages I had made that were all the same size (each about as big as a postcard) and ‘transforming’ them into a fortunetelling deck.

It was pretty easy to do, because it involved – ta-daaa- absolutely nothing! Nothing, that is, except telling people I could tell their fortune by looking at the cards. As I explained, ‘Art Fortunetelling is based on two premises.

Just telling (reminding) people that art has meaning was nice for me – and because I was telling people’s own individual fortunes they tended to look a whole lot harder for the meaning in the cards they were picking.

As an artist, it’s always nice to have people looking at your work.

While some people were happy just to sit back and let me tell them what I saw in the cards, others ran out ahead of me to interpret their own cards. Which made my life as a mystic a lot easier.

Below are 2 new cards I made last week. These are the first collaged ‘cards’ I made after having decided to use the collages in fortunetelling, and I found out something very interesting while I was making them. 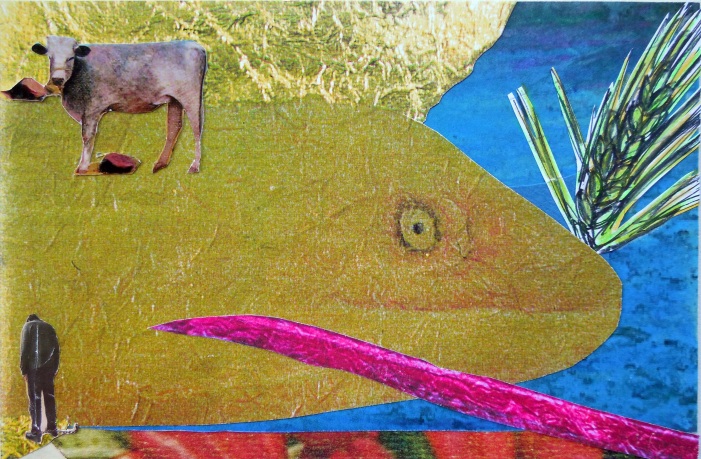 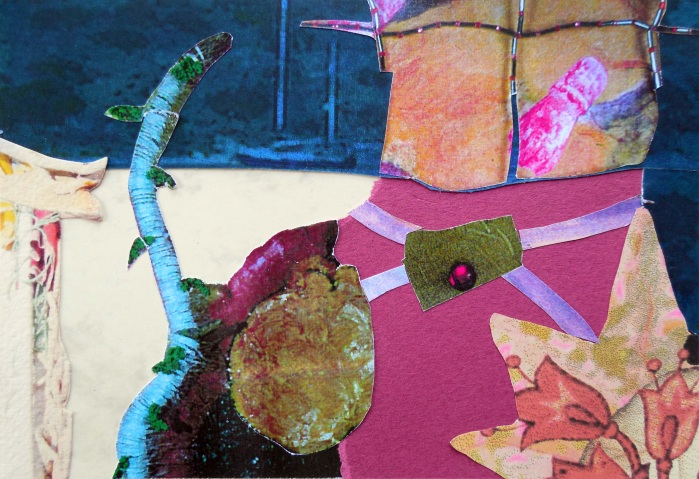 What I found out was that… as I was making them, I caught myself consciously trying to interpret them, and everytime I caught myself, I had to stop working. Before, I had had thoughts like, ‘oh, that’s interesting’ and ‘that makes sort of sense there’, but I had never had thoughts like ‘oh, if this is here, then that could mean this.’

Of course, all those possible meanings were there in the previous collages – and when I looked at them after they were finished, I could draw that meaning out – but once I started trying to fix the meaning at the very moment I was working, everything collapsed. My conclusion is:

I’m fairly sure there’s a philosopher or two out there who has put this much more eloquently and much more clearly. This was all I could manage on my own.

To demonstrate the process of how Art Fortunes work, I tried to read my own fortune. 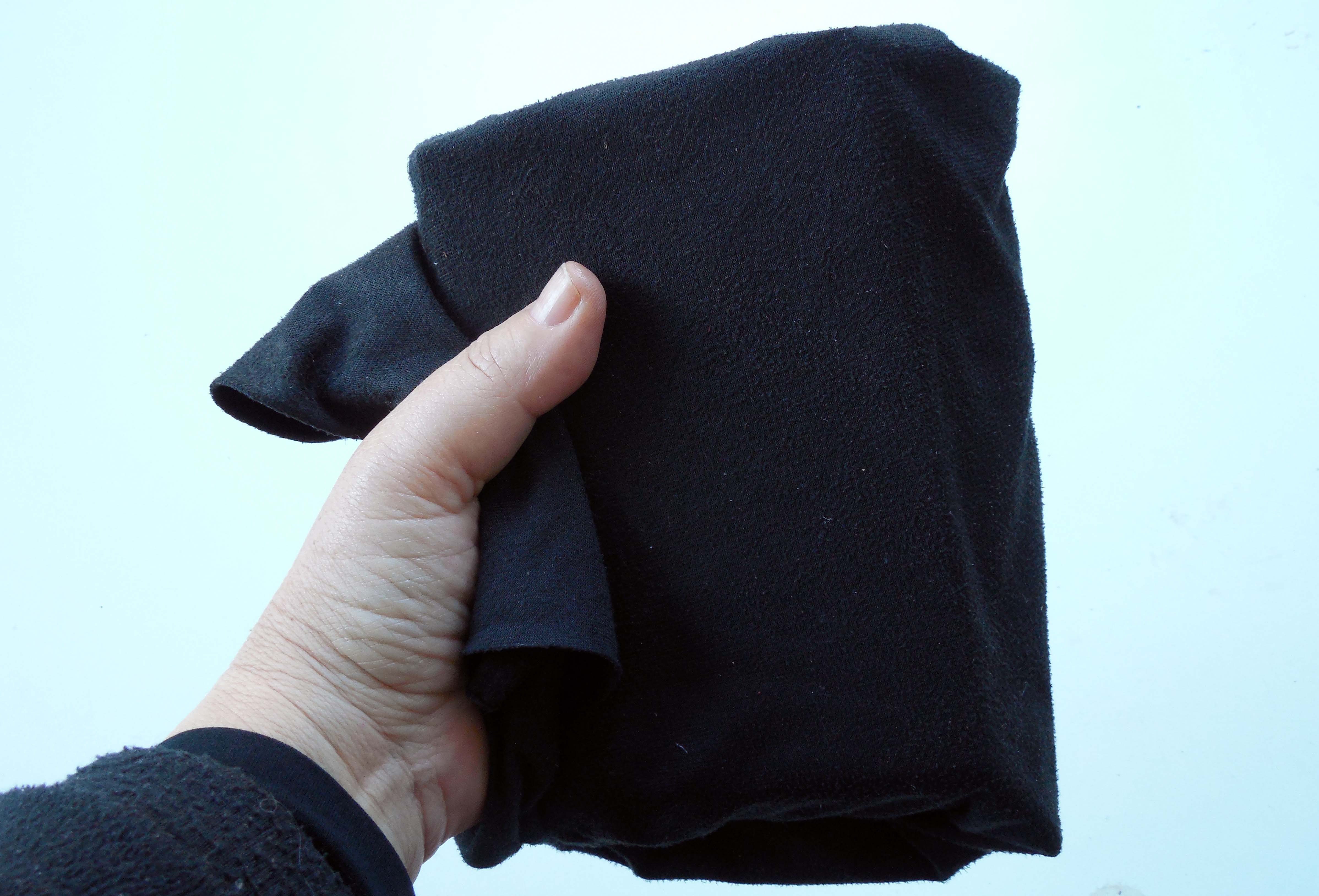 After holding onto the deck of cards until I felt as if I had transferred enough of my own energy to them, I spread out the cards face down and picked one without looking. I turned it over, and it turned out to be this one:

I called it Turtle Dreams.

Then, I turned the cards over so I could see all the images, and I looked through them, trying to pick the one card that I felt ‘looked right’ with Turtle Dreams. I looked at all of them and narrowed them down to four possibilities, then out of those four, I picked this one: 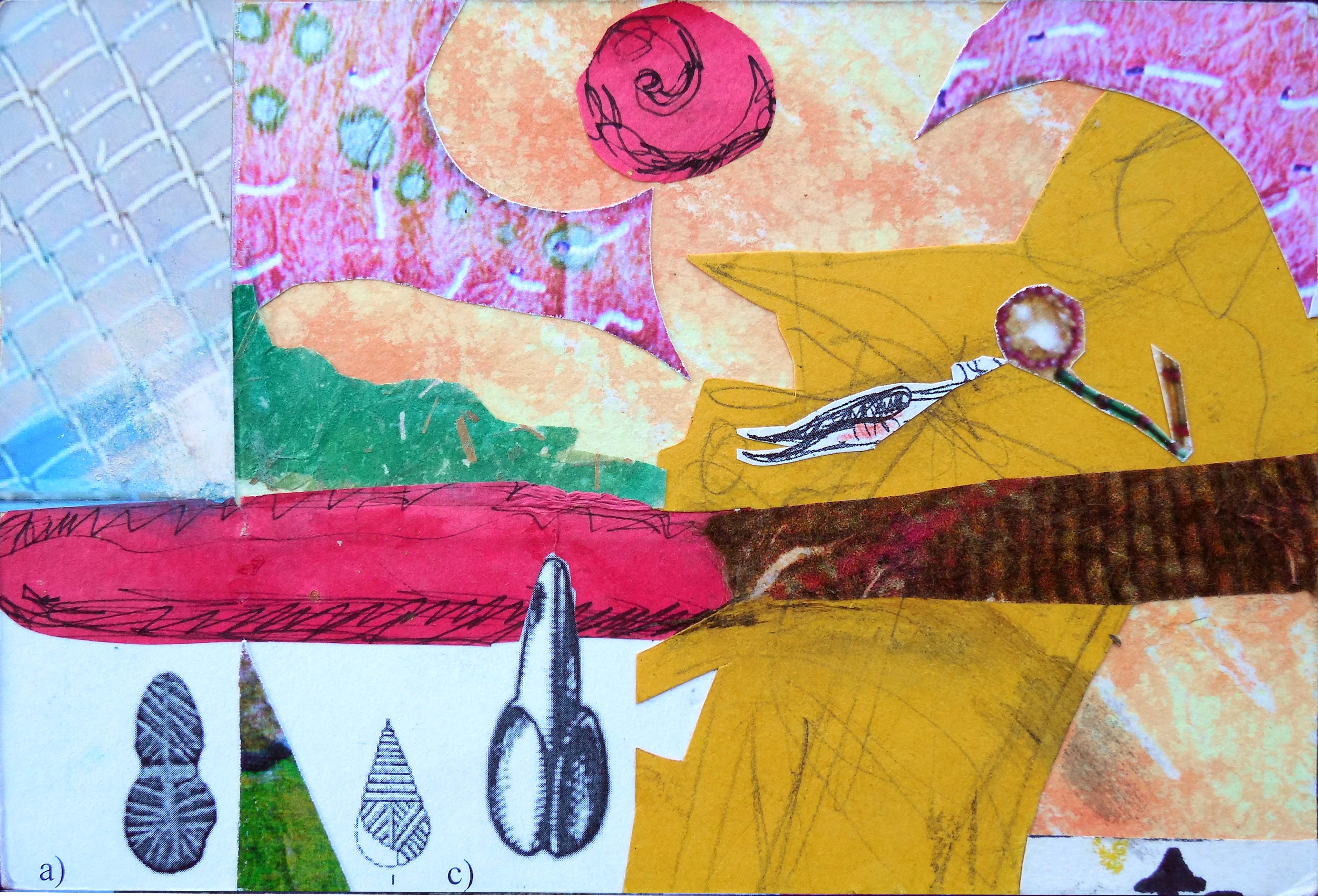 Then, I turned the cards over once again so I couldn’t see the images, and I picked out a third card ‘just by feel’, and without turning it over, I placed it face-down on my black ‘reading cloth’, like this:

Then I started the reading.

The card I picked by looking, Pointy Objects,  is the ‘present consciousness’ card. It’s how you see your current situation – or how you would like to see your current situation. It represents your awareness of what’s going on in your life. In this case, there appears to be a lot of chaos, a lot of violence, and an attempt to flee. Interestingly, Pointy Objects has often been selected by people I’ve done readings for as their ‘present consicousness’ card. I think it is a sign that there is a lot of shit going on in the world. I think you would probably agree.

Turtle Dreams, which is the card I picked without looking, represents the subconscious. It’s what’s going on even if you’re not paying attention. Compared to Pointy Objects, Turtle Dreams still represents an atmosphere fraught with danger, but there is a much greater sense of caution – moving slowly to avoid the danger, rather than running quickly away from it. Unfortunately, it is hard to tell if the turtle is crawling away from the danger zone, or slowly but surely heading right into it. The only way to find out is to look into the future- in this case, the final card, which, when turned over, revealed this:

Normally, I would have a lot to say about what this card means; in other words, what one can expect to look forward to (or not) in the future. However, when I turned this card over, I found I was without any words, without any interpretive powers at all.

I think what I found out was that you just can’t predict your own future.