So I suppose I ought to post ‘the princesses’.

These are the 9 sketches that are being transformed into life-sized models as we speak (well, ok, it’s 8 o’clock on a Saturday night, so there is probably no one at Show Reklam working at this very moment – but Monday afternoon I’m supposed to go and check them out, so I guess it’s fair to say that they are almost ready. Inşallah.)

If you’ve been following the project so far, then you know that the original ‘Ottoman Princess’ in this installation was designed based on an Orientalist engraving from the 19th century. We had a little group discussion regarding how to ‘dress up’ the version in this installation, and based on that discussion, she ended up looking like this: 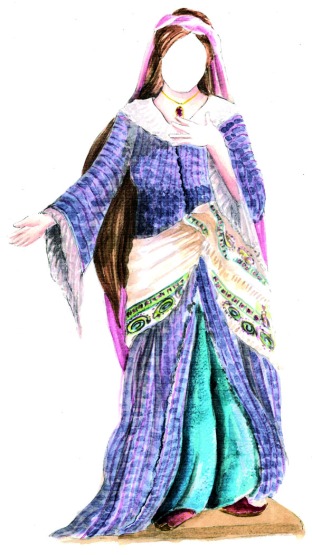 I particularly like her ruby necklace and her turquiose shalvar. She’s in the same pose as the first engraving I had picked to use as a sketch, but I like her better because she looks to me ‘more realistic’. Just what that means is a bit confusing, because, in fact, she’s a totally made-up character.

But then all identities are ‘made-up’, aren’t they?

This is one of the things that I wanted to point out with this installation.

In fact, one of the most difficult things was making up only eight identities; I had to set a limit somewhere, due to space as well as costs, and 8 seemed like a good number. The idea was to have four of the women wearing a head covering and the other four not. But there are so many reasons why women may ‘cover themselves’ – and so many ways of doing it, from a traditional village headscarf (that you don’t need to be a Muslim woman to wear)

to full ‘black chador’ – an extreme form of dress for a woman – and something that is not all that common in Turkey – but not all that uncommon, either.

That extreme form of religious dress is something that a lot of ‘secular’ Muslim women get pretty upset about; the worst fear: that someone (or some government) will force me to do this.

At the opposite extreme, there’s definitely a prejudice that equates an ‘uncovered’ woman as a whore – and that doesn’t make distinctions; in other words, dress like this:

and you are immoral.

From the pictures, I think you will be able to make the judgement that all these uncovered women are different types – or, better, have different identities; in fact, the same woman may adopt a different ‘persona’ – i.e. ‘identity’ – on a different occasion (opening party? office work? shopping and a movie? a hike in the woods?) that is reflected in what she wears.

The possibiliities are endless; for the installation ‘Have Your Photograph Taken as an Ottoman Princess’, I just tried to pair up ‘covered’ and ‘uncovered’ versions from ‘casual’ to ‘extreme’. This is what I ended up with: all the women above, plus two more:

And while none of these women are ‘really real’, they are all ‘sort of real’ – or, better ‘could be real’ – they could be on the streets of Bodrum or Ankara or Nevşehir – all places where I’ve lived, and where I’ve seen ‘women like them’.

In just about 2 weeks, it’ll be time to try out these women in public at the Bodrum Castle as pat of the Bodrum Biennial – to give other women (and men, and girls, and boys) the chance to see what they would look like ‘as’ these women.

One response to ““Ottoman Princess”: 9 Lives”