More on the process behind my latest installation, “Have Your Photograph Taken as an Ottoman Princess” (with more background below in my previous posts.

Most of ‘the Princesses’ are now beyond the sketching stage, getting onto the watercolor stage, and a few of them are on the computer already, getting ready to be blown up to life-size.

For that, I was down at the sign shop last week to go over the process, trying to find the best way to blow them up to get the look that I want. Unfortunately, it is not a straightforward process (would that it were!). The ‘Princess’ I’ve named ‘Sunglasses’ (for file-finding purposes) has been the one I’ve been using for try-outs: 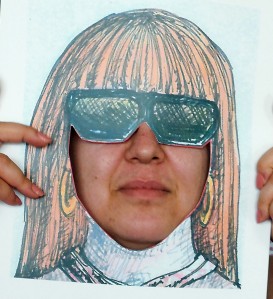 Zeynep at the sign shop was skeptical about the size of the ‘face opening’, but after she tried it out she agreed that it was not ‘too small’ as she had feared.

Zeynep also thinks the image is fine the way it is, but I think it is a little too ‘cartoony’, when I was really going for ’19th-century engraving’- so that’s going to change.

But more interesting than the printing has been the response to people trying on ‘the princess mask’. Two things stood out there: 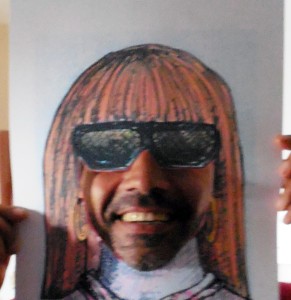