Column Collage II: “Hey, can I steal it?”

This post really ought to go out to May Kawamoto, my friend and neighbor for the 3 years I lived in Oakland back in the early ‘90s before I hauled off to Turkey. We were in a live-work space housing artists and other misfits in a ‘borderline’ residential neighborhood near Lake Merritt. May lived upstairs, and I lived downstairs. Mostly, we hung out upstairs, because that was where the group kitchen was, but occasionally May came downstairs to see what I was up to and what she could steal. “Hey, I like that; can I steal it?” she would ask. “Sure,” I’d answer, “Stealing is free.” And then we’d go upstairs to her studio, and I’d return the favor: “Hey. Is that new? I want to steal that. Can I steal it?”

I think that pretty much sums up how ideas in art used to travel around.

I’m stealing from myself!

Or, as I prefer to think of it, I’m ‘recycling’. (Hey, maybe this post should go out to Erol Bey, who once tried to convince me – without a tinge of post-modern irony – that paintings of cats were a perfect (purrfect?) example of ‘environmental art’.

This is the second ‘column collage’ I’ve finished from the leftovers of my square paper being prepared for painting. (Note 1: I have a habit of taking ‘perfectly’ proportioned paper and turning it into odd shapes like squares and columns that are supposedly hard to work with and also don’t fit easily over a couch. Note 2: 2 or even 3 square paintings together fit quite nicely over a couch, and a long column solves the problem of how to visually balance that full-length mirror by the front door…)

Above is the bottom part of the collage. (By the way, it doesn’t have a name yet, and I am taking suggestions…)

The very bottom is a collage that itself is made up of recycled artwork – or, more accurately, photocopies of artwork. Notable are the “bones pillow” (that was the name of the piece that the “green thing” came from), and the corn – which is not really from an artwork, but was used to illustrate the “12-Month Bodrum Garden Guide” (the month of May, in case you’re wondering).

Now for the middle part of the collage…

It’s mostly left-over ‘pavement’ books (the brown pages had to be trimmed, and not all of the pictures made it into the books), but there’s also part of a sketch of ‘the bee-hive houses of Harran’ from a trip to Urfa back around 1995 or ’96…

And the top of the collage (and just to make it clear, there are no real divisions bewteen Top, Middle and Bottom – it’s just ‘cause the proportions of the piece make it too hard to see the details in just a single photograph), well, 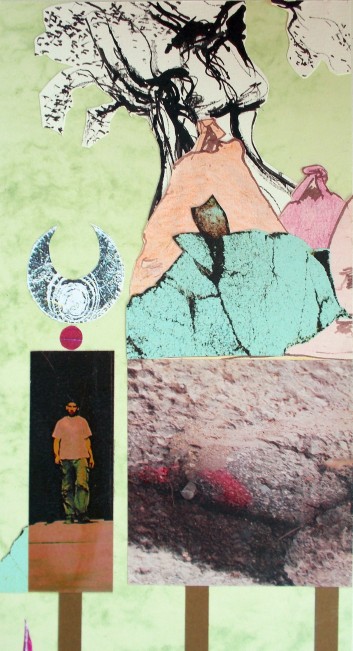 That’s an ink sketch from a photo of an olive tree in Havran, in Balıkesir.

A colored pencil sketch made sitting in the shade in Harran, in Urfa.

A photocopy (on colored paper) of one of the workers in the boatyard in İçmeler, in Bodrum.

And more pictures of pavement.

Altogether, they make this: