Well, my latest oil painting was apparently a success – or at least it was well-received by the person it was done for, and it got me into a ‘production phase’ – which, appropriately, is much more productive than the ‘consumption phase’ I was in previously. I suppose I could think of that as having been an ‘incubation phase’ – except that it involved an awful lot of television. At any rate, I was loosely commissioned (“Sure, go ahead”) to do a few more pieces. Yes, they are oils. But even though the end product is an oil (pastel on paper –I just don’t do oil on canvas), the process is still one of collage. I began by taking photos of the boatyard… 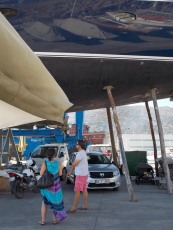 Then, I downloaded them onto my computer, and started doing a bunch of cutting and pasting. I described the process to a friend by comparing it to Georges Seurat, who, like so  many others, Impressionists, as well as before and after, used to go out and sketch – ‘in plain air’ – and then take the sketches back to the studio and use them in their paintings – not just copying, but rearranging, as appropriate. (Believe me, I do a lot of rearranging…) So, from photo to computer to print-out to pastel drawing, the results of a complicated concatenation of technological cut-and-paste is this: 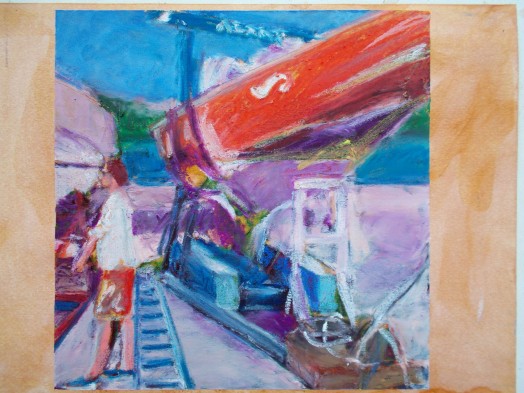 So, Wednesday we’ll go down to the boatyard and see what the response is in person. Hmmm.